Global leader in steel production, ArcelorMittal, continues poisoning the citizens of Zenica, Bosnia and Herzegovina, with enormous air pollution (1). The corporation misuses its position as a major employer and operates without valid environmental permits (2). The levels of dust in Zenica are 30 fold higher than in central London which threatens the health of exposed citizens (3). ArcelorMittal says it needs more time to improve its “fast progressing” environmental performance because they finance the investment exclusively from their own resources (4). According to NGOs, these statements are not entirely true. Regardless of the 25 million EUR loan (5) from European Bank for Reconstruction and Development (EBRD), air pollution is still rising.

Biju Nair, CEO of ArcelorMittal Zenica (AMZ), stated “it took 20 years to improve the environmental situation in the Czech Republic,” another country where the corporation owns the factory. He added that the corporation “did not receive a single mark from the government, from EU or other institutions” and that “the process is much faster in Zenica, but we (AMZ, Ed.) need more time."

According to the non-governmental organizations, this is not the full truth. Firstly, they are questioning the “fast progress;” secondly, they report about investment from external sources. ArcelorMittal has been operating in Zenica for 7 years, and major environmental projects have been repeatedly delayed and are far from complete implementation.

“In 2005, factory renovation was supported by  the European Bank for Reconstruction and Development’s 25 million euro loan," reminds Martin Skalsky of Czech NGO Arnika. “This loan was conditioned by the elaboration of the Environmental Action Plan. The plan suffered large shortcomings and did not lead to any significant improvement in air pollution. 2008 claims of the company that the plant will comply with EU environmental standards by 2012 never came true,” Skalsky continues.

Moreover, some of the environmental permits of the factory have already expired in December 2014, and responsible authorities did not issue new permits. Therefore, in accordance with the national law, the factory should have been closed down.

Although the initial conditions were not that different between Czech Republic and BiH, in Czech city of Ostrava, pollution showed a rapidly decreasing trend. SO2 emissions of 2013 dropped to almost one sixth of the levels in 2007, and emissions of PM10 decreased by two thirds between the same period. Meanwhile, the annual production rate of 3 million tons of steel remained consistent (6). Mittal Steel first came as an investor to CZ in 2003 and in 2006 fused with Arcelor (12).

“We do not want the steelworks to be shut down,” says Samir Lemes, president of Eko-Forum Zenica. “Our goal is to achieve a better environment and access to information. Compliance with the national law and using modern technologies to protect citizens’ health should be unquestionable,” Lemes adds.

Steelworks in Zenica privatized by ArcelorMittal, suffocates Zenica‘s 120 thousand citizen population since its re-opening in 2008. The privatization should have been followed by 150 million euro in ecological investments, but only a third of that sum was actually invested.

“Air pollution now reaches the outrageous levels of the 1990s while the production rate in the steelworks is only at half of its capacity. Last year, allowable limit values for hazardous sulphur dioxide have been exceeded for 252 days. The law allows exceeding the limits for a maximum of three days a year,” says Lemes. He further explains, ”Unfortunately, the state authorities are paralyzed by the fear of the possible loss of working places and keep their eyes closed against the pollution.”

The discontent of the local citizens culminated in December 2012 when thousands of people demonstrated in the streets demanding enforcement of environmental regulations (7). ArcelorMittal finally installed some obligatory end-of-pipe technologies in 2013. Irrespective of that, hazardous sulphur dioxide emissions rose again to 84 times of the limit values last year. Due to breaching the binding air pollution limits and inaction of responsible authorities, Eko-Forum Zenica filed criminal charges against the corporation in September 2015 (8). 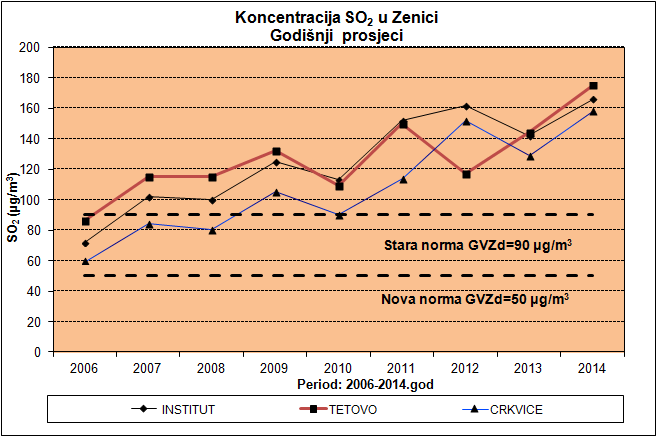 Report on results of the continuous monitoring of air pollution in Zenica 01.01.2014 - 31.12.2014 (02/15-EKO), Institute for protection and ecology, Laboratory for measuring environmental pollution, Zenica, January 2015 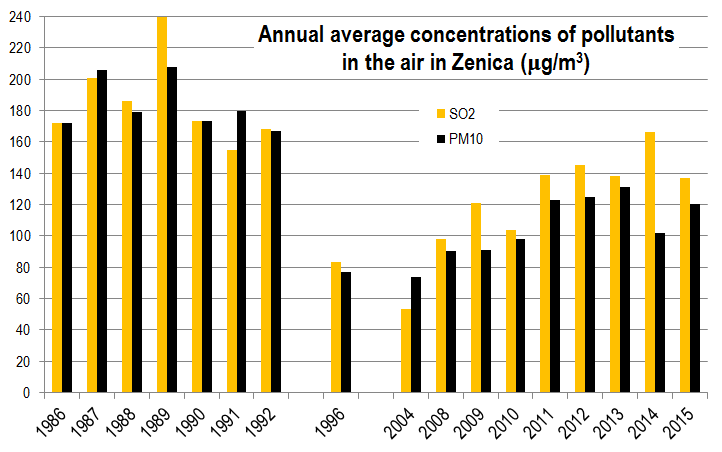 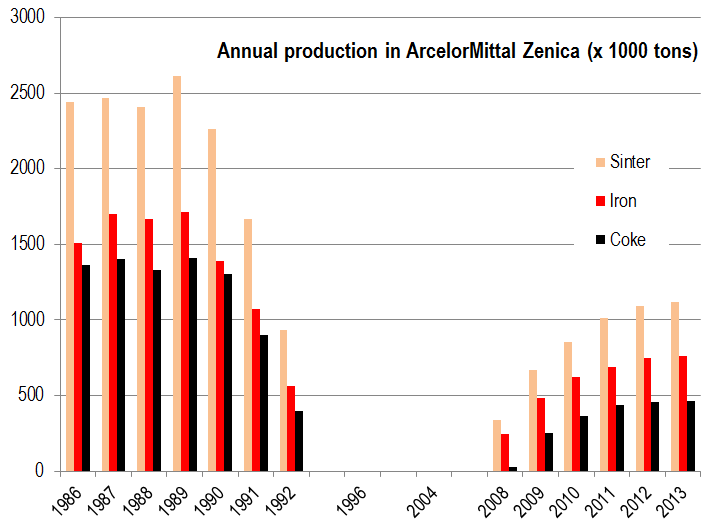 Several permits expired by December 2014 and articles have been published in the news.

The activists lead by Lemes also complained about the environmental situation and call for the ones responsible to obey the laws and to do their job properly.

Common levels of the fine particles of dust, PM10, are in Zenica now at the incredible hourly average of 985 µg/m3; the steelworks being now the major source of pollution. Common hourly averages in the central roadside London are stable at around 32 µg/m3, with twelve excessive levels (that are still moderate and do not exceed 40 µg/m3). EU air quality standards set the safe daily limit to 50 µg/m3. This threshold should not be exceeded more than 35 times a calendar year. The Air Quality Index sets the threshold of daily concentration that is already considered unhealthy to higher than 150 µg/m3. More information related to this topic.

On Sunday October 4, Biju Nair, the CEO of ArcelorMittal Zenica, was interviewed in Reflex programme on OBN TV. The part of the interview we refer to begins at 7:43.

Information about the 25 million euro loan from the EBRD to the implementation of a large renovation project. In the section which elaborates on the environmental impact there is already a note about postponing some items of the Environmental Action Plan (EAP).

The slow progress with EAP and irregular permitting procedure is also mentioned in the report of the Bankwatch network, ArcelorMittal: Going nowhere slowly, Chapter 6, How to lose friends and alienate people: ArcelorMittal in Bosnia-Herzegovina (page 17–19). 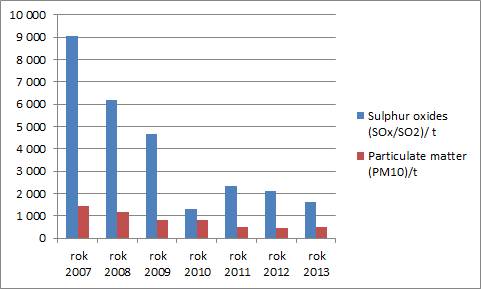 Data on production published in the Annual report of AMO 2014.

Several thousand citizens from Zenica in central Bosnia protested on Saturday urging the ArcelorMittal steel factory to install filters and cut emissions from the plant.

Article on the protests in Balkan Insight

Eko Forum Zenica filed criminal charges against ArcelorMittal and its two directors alleging air pollution, as well as against the former FBiH Minister of the Environment and Tourism and the director of the FBiH Inspection for neglecting their duties. Read more about this topic.

Tweet
More in this category: « Majority of Polluters Released Less Carcinogenic Substances, but Spolana, on the Contrary, Released More of Them Levels of Toxic Substances in Elbe and Bílina Sediments Reach up to Twenty Times the Amount of Average Values »
back to top